So what is a polyglot, sounds like a Russian millionaire.

I believe that anyone of us can become a polyglot.  Take this example, I have a granddaughter who’s only three and a half years of age and she speaks  four languages,  French as she lives in Freiburg the French part of Switzerland, German as the father is a Swiss German speaker, Greek the mothers place of birth and English thanks to her grandfather, that’s me.

children are sponges at an early age.  They say that a child can learn easily up to four languages from in its first 5 years.  Amazing isn’t it when there are people that have lived all their lives trying to master one new language.

There are a few famous polyglots out there like: 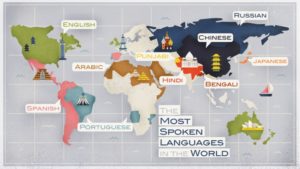 Map of the most spoken languages

Audrey Hepburn, actress/humanitarian – Dutch, French, English, Italian, German, Spanish. Audrey Hepburn’s mother was Belgian, and she grew up speaking Dutch and French. She later learned a bit of Spanish, which she used later in her life while doing humanitarian work as a Goodwill ambassador for UNICEF.

Cleopatra, pharaoh – Cleopatra was reputed to have spoken nine languages, including her native Greek, as well as Egyptian, Syrian, Persian, and Arabic among others.

But the most languages spoken by one person and who holds the Guinness book of records is  Ziad Fazah. Fazah claims to be able to read and speak 58 languages including Arabic, Polish, Thai, Urdu, Norwegian, and many more.

If you are looking to add a new language to your list of spoken languages, ESO teachers can help you to become a polyglot. Well at best a bilingual.

becoming a polyglot isn’t easy, it takes a lot of work.  My tips are the following:

1. Learn one language at a time.

4. Have fun while learning.

and the most important,