Ordering food in English at an English restaurant.

Are you learning English and still find it hard to have the confidence to be ordering food in english. Well, it’s not as hard as you think.  Let’s take a scenario where you are your friends are on holiday and you are at a restaurant and the best English speaker amongst you does the ordering. Does it sound hard, not really, so why don’t you try.  Ordering in English is most times about confidence not ability to speak English. 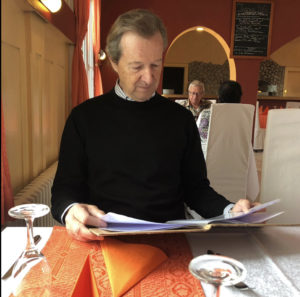 After being greeted by the waiter for the first time the question normally is, ‘are you ready to order’

where you then reply, yes or no, if it’s no, you would normally follow that with ‘can we have a few minutes to decide’

lets go to the next step.  The waiter returns and asks you if you are ready.   You would answer, ‘yes I or we are, can I have the salad to start off with and for the main I would like to have……‘

the waiter if he is polite would normally answer when you thank him with a polite ‘ you are welcome’  this is the normal response you would get from a waiter.

Let’s look at a typical interaction

‘Good afternoon, welcome to Giovannis restaurant. How are you today?”

“Are you ready to order.”

“I would like to try the Caesar’s,salads and for the main a spaghetti carbonara”

See how easy it is to order your first courses

There are also many ways to ask to pay when you are finished, for instance;

”Can I have the bill please”

”Can I pay please”

Here are some important words to know when going or ordering in a restaurant:

à la carte (adjective): ordered as a separate dish; not part of a set menu.

appetizer (noun): a dish that’s eaten before the main course.

course (noun): one part of a meal.

cuisine (noun): a country or region’s style of cooking.

dessert (noun): sweet dish served usually at the end of a meal.

eat out (phrasal verb): to go out to a restaurant.

hors d’oeuvre (noun): a savoury food served as an appetizer.

make a booking (also “book a table”) (phrase): to contact a restaurant and reserve a table for a meal.

pudding (noun): a soft sweet food eaten as a dessert.

savoury (adjective): salty or spicy rather than sweet.

service charge (also “service”) (noun): an extra amount added to a restaurant bill that’s meant to be given to staff for their service.

side dish (also “side order”) (noun): an extra dish  that’s ordered together with a main dish.

special (noun): a dish that’s available sometimes, but isn’t on the regular menu.

tip¹ (noun): extra money given to a waiter for his good service.

vegetarian (adjective): of dishes or diets that don’t include animal products.

waiter (male) or waitress (female) (noun): a person who serves the guests.

so here it is

I hope you find this useful the next time you go to a restaurant.  Don’t be shy, order the meal yourself in English, show your friends how confident and able you are.  Remember it’s about confidence.

at www.english-study-online.com the qualified native English teachers can help you with any English needs you might have.